The invention of the Transient Designer | Transient Shaper Technology

My Invention of the Transient Designer – On my trails of transients and my personal adventure with envelopes – but suddenly one of the most revolutionary ideas of the 90s was born, even without me realizing it.

(translated from the German Blog article)

Many of you may not even know that I invented one of the most influential and revolutionary audio processors of the late ’90s, the Transient Designer. I was young and really didn’t need much money, I was more looking for one specific sound. You’re probably wondering how this came, what I had in mind, and heck, what does Michael Jackson have to do with all of this?

With this blogpost, I will take you on a personal journey into my bloomy past and i will tell you how I unwittingly became the inventor of one technology. This technology became a standard in every DAW and continues to be used in countless sample libraries and until today. Today known as an award-winning technology.

It all started when I, as a passionate musician and professional radio and television engineer with ambitions for analog technology, got a job as a developer for SPL Audio in Niederkrüchten / Germany in 1995. At that time I just left my band as a keyboard player and started to build my first home studio in my bedroom – of course with the idea to get rich with my music and sell millions of records. You all know that! Don’t you?

I equipped my home studio with a sampler from Ensoniq, the EPS 16+, a Kawai K4 Synth, a Roland D70 and a Kurzweil K2000. As common in the nineties, I connected my collection of fine Soundgenerators via MIDI to an Atari 1040 ST with the good old Cubase installed.

Besides, I had an old fashioned analog mixer and my speakers so that I could work creatively in my home studio. With this setup, I started to compose my own songs, work on my sounds and tweaked knobs all night long to create sequences to get the best out of my Instruments. At that time my outboard equipment, unfortunately, was quite poor and I could only dream of buying a compressor.

The perfect change: Creative Fridays in the company

During my time working for SPL Audio, I was frequently asked to work in the production where I was responsible for the technical and acoustic testing routines of their Products. This was a kind of first quality control. A very frustrating fact was, that I sometimes was asked to do stupid and idiotic tasks for weeks. These task were really time-consuming and exhausting and most of the time no brains really were worn out. So I decided to use Fridays to give my creativity full scope.

During the morning I had the idea for a product. This idea I wanted to realize in the afternoon. There were cardboard, which was commonly used to safely stack several products. For me, that cardboard served as paper for sketching my circuit schematics, that I thought of. On Friday noon I took all my full enthusiasm and armed myself with soldering tools.

When I was in a good mood, I developed and build a completely new product from old circuit boards and housings on just only one Friday afternoon. In a very Frankenstein-like Way and with my vision: The most important thing was that the product has to be crazy and it should generate sounds and create noises. One circumstance turned out to be quite cool. Since there were always defects in some front panels, housings, and circuit boards during production, these parts no longer could be used for assembly and I was able to recycle those parts sustainably and creatively.

For my own vitalization, I often took the circuit board of the Vitalizer and created something completely different. A surfboard? Nah, not really! The nice fact about these circuit boards was that I could already use a pre-build infrastructure. There were Power supplies, audio jacks, potentiometers and switches that were already implemented for the front panel.

Thankfully, I had a reasonable quantity of OP amps on hand and even with the LM13700, a type of a VCA. What a hell of luck. On the back of the circuit board, I soldered my new connections with several cables and cable bridges that created all the new functions that I wanted.

The holes on the front panel were already punched and I always needed to consider useful features and functions for all of them. Even though I only needed four potentiometers for my new project, I needed to come up with something useful. So I uses all the left holes creatively. If I needed an additional switch I could easily add it using the drill.

On Friday evenings a good schoolmate was already waiting for me with some of his spray cans. I went to his house with beer and my new product in my bag. Finally, I had to paint the front panel of my newly created baby. I had to use exactly the paint from his leftovers and i was limited. With a permanent marker, I labeled the front panel afterward.

That way I created a whole bunch of crazy and creative self-made products for my home studio. Filter boxes with LFO’s, AutoPaner, Gates, Bass Drum Generators just to name a few.

There I was working with my collection of self-made audio processors in my home studio. As a bedroom producer continuing to refine the sounds of my self-composed songs. I felt in love with an album in 1991 from Michael Jackson called Dangerous. I terms of the sound I found it pretty amazing. Especially the punchy drum sounds that smacked over my speakers were extraordinary to me. At that time I knew that I had to recreate this sound for my own songs in my home studio. But how?

With my equipment, I couldn’t get that sound. At that time the all-knowing internet was still learning – Google and Youtube couldn’t help me either. I didn’t had a compressor at that time. My philosophy, then as today: “What I don’t have, I will build myself”. At the same time, I had the first idea of the predecessor of the Transient Designer – the Transient Equalizer. As I was already experienced in creating new products in a Frankenstein-style. I developed the first prototype of the so called Transient Equalizer.

The basic principle of this product was similar to that of a noise gate with a threshold control. This also triggered an envelope like in a synthesizer. Additionally, I spend this prototype a decay to control the decay time. As I already mentioned several times, I had to accommodate eight useful potentiometers to give the front panel a neat face. And so I had the idea to implement a noise generator. I could mix this noise generator together with a bandpass into the VCA. I used the last potentiometers for a mix control and a distortion stage for the effect signal. It turned out that this was perfect for polishing up lame and nasty snare drums from my sampler. With this prototype I could already make very crazy sounds but…

Unfortunately, it turned out that this threshold trigger was not always perfect and I had to optimize it. The following scenario happened: If my signal was too quiet, no envelope was triggered and if my snare fills were too fast, no new ones could be triggered. Many noise gates still have exactly this problem today. Have you ever noticed it? I soon found out that exactly this circuit was not suitable for everything and unfortunately did not work very reliable.

Master of the envelopes – finally, my first compressor!

So there I stood in front of my pile of broken glass, which caused me sleepless nights. Envelopes, dynamics and the dream of my own compressor. All the time I invested in this project I simply forgot to continue working on my “Number 1” album production. How am I supposed to get into the Billboard charts? But… not without this particular sound! Suddenly a ray of hope and intuition: A voice telling me forcefully: “A compressor, Ruben! A compressor!”. In 1996 I finally developed my first own compressor called DynaMaxx.

A real challenge for me was to develop a compressor with only one single knob. To realize it, I worked very intensively on the subject on how I can transform the AC voltage into a control signal for a VCA. Especially the rectifier and the time constants were a big challenge. For this purpose I used countless signals from my Kurzweil K2000 to get a compression result that was as discreet as possible. The endless adjustment of the time constants then brought control behavior which worked very well on many types of signals. The DynaMaxx was already a feedforward compressor at that time. I was able to realize a de-compressor and additionally an intelligent noise gate.

My first compressor became a real success! Quickly, it was used in many studios and was also appreciated in Live Environment because it delivered fast and good results.

It was exactly through this development that I gained real expertise on the sidechain of a compressor. Did I perhaps now conquer the envelopes? More to come in the second part of my personal Transient Designer Story.

In the meantime please have a closer look into our nvelope. 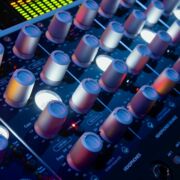 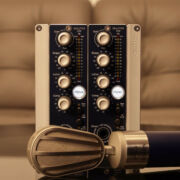 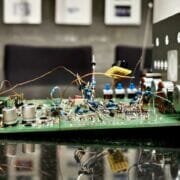 Want to join the discussion?
Feel free to contribute!

We care about YOUR music.

@starskycarr „Some of my not so secret sauce. Th

@madame_vegas_boudoir “Just want to Xpress some

Many engineers love the alpha compressor plugin, b

While knobs obviously do not contribute to the sou

With the elysia karacter (500/qube) you will enjoy